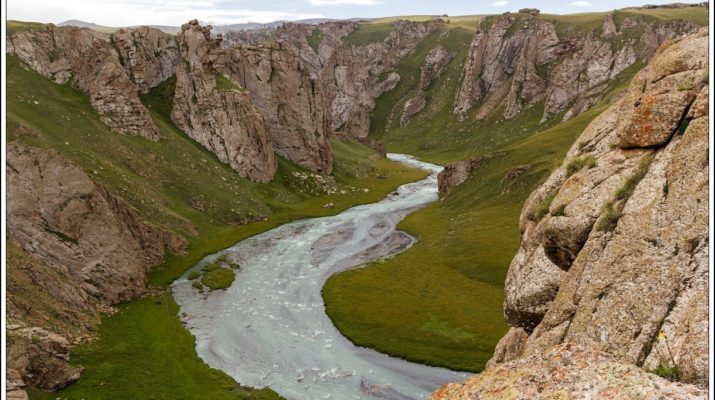 Kakshaal-Too is a mountain range in the system of the Central Tien-Shan, on the border of Kyrgyzstan and China. The name of the range comes from the Kyrgyz language “Kakshaal” – “Terrible Mountains” or “Non-accessible Mountains”.

Remoteness, wildness and uncertainty are the concepts that characterize and give an idea about this area of ​​Tien-Shan. Before the collapse of the USSR, these areas were closed. Only border guards and, with rare exceptions, shepherds were rarely allowed to be here. Almost the entire territory of the district is occupied by inaccessible range: Kokshaal-Too Barkaldoy, Karly-Too. The prevailing altitude of the ranges is 3400-5600 meters. The highest point is the Dankov peak (5982 meters) which is located in the eastern part of the Kokshaal-Too range. The ridges of ranges are predominantly narrow, rocky, with deep saddles and sharp tops in the form of pyramids and peaks. Along the foot of the cliffs there is powerful debris of stones and rubble. Above 4000-4400 meters, the mountains are covered with eternal snow and glaciers.

For the first time the area was discovered by a Russian expedition. In connection with the growing interest of Russia in Central Asia since 1856, the first research expedition began coming here. One of them was led by the Russian geographer A.V. Kaulbars, who led an expedition to study the mountainous area south of the Naryn River in 1869.