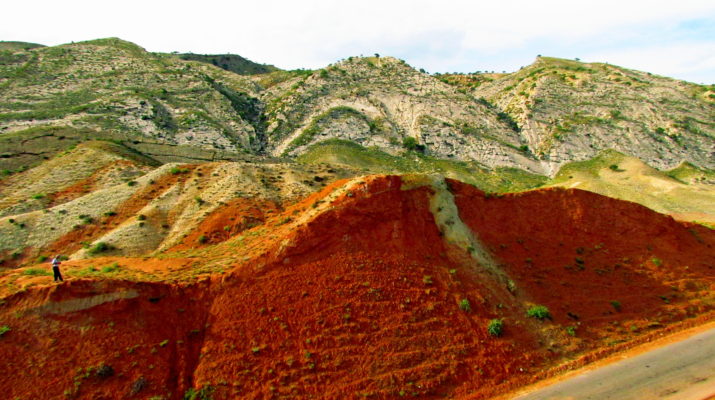 The Mesozoic geological complex of rocks in southern Kyrgyzstan contains interesting paleontological artifacts. In 1966, in the vicinity of the Tash-Kumyr city in the Middle Jurassic (J2) Callovian tier, the only sauropod was found for the Tien Shan. An initiative group of geologists considers these places unique. These places should be preserved for generations as a geological heritage of world significance. To organize a Geopark here, we need to conduct a paleontological expedition to study the geological layers in order to prove to the authorities about the need to organize a geopark here.

The Tash-Kumyr city is located on the banks of the Naryn River. During the Soviet Union, coal was mined and continues to be mined. But, we are interested in the territory, which is located west of the city, in the savannah of Kizil-Dzhar. Here dinosaur eggs, dinosaur bones and petrified trees were found. The first skeleton of a sauropod in the territory of the former USSR was also found here. The local landscape is poorlands. We hope to find dinosaur bones and make a reconstruction of the Central Asian dinosaur. In the neighboring Mailuu-Suu city, we found traces of a dinosaur on paleogene limestones. Apparently, these traces also belong to the young sauropod.

The most interesting finds have been made in deposits of the middle-upper part of the Balabansai Formation northwest of Tashkumyr city (Balabansai I). Here the group of the Leningrad university under N.N. Verzilin’s supervision in 1967 had excavated a partial skeleton of a sauropod. The year before N.N. Verzilin had found a more complete skeleton of a huge sauropod in the Balabansai ravine. The skeleton was excavated by a group of the Paleontological Institute in Moscow under A.K. Rozhdestvensky’s supervision. Large parts of the skeleton were recovered, only the skull and a part of the tail were missing. This specimen is the most complete skeleton of a dinosaur found in Kyrgyzstan. It remains has been undescribed for a long time and its systematical position never has been determined precisely. And only recently was described as a new neosauropod Ferganasaurus verzilini, gen. et sp. nov. The femur of this sauropod is on exhibition of the Paleontological museum in Moscow.

Since the beginning of the 2000s, the combined Kyrgyz-Russian-German field team worked here. Based on excavated dinosaur material from the Middle Jurassic (Callovian) Balabansai Formation in the northern Fergana Valley, Kyrgyzstan, were described and attributed to a theropod Tetanurae indet., a sauropod Neosauropoda indet., a stegosaur Stegosauria indet., and a new pachycephalosaurid Ferganocephale adenticulatum gen. et sp. nov. Recent excavations close to Tashkumyr city have produced more complete and partially associated dinosaur remains.

Vast areas of the Balabansai Formation are still unexplored.  Judging from the new finds described above, it is very likely to find more and especially new diagnostic material of dinosaurs. Moreover, the most promising area for exploration crops out around the local city Tashkumyr, where most vertebrate fossils were found in the past.

The early-Middle Jurassic history of sauropods is still not well known. Especially a lot of puzzles around Ferghanaosaurus, which was found in 1966. We want to explore the area and find the remains of a new dinosaur to confirm many theories of paleontology.

The objectives of the expedition:
1. The search for the remains of dinosaurs,
2. Extraction of the dinosaur from the earth
3. The study of the dinosaur and its reconstruction

GeoExplorersClub will receive all necessary permits for paleontological research. During the expedition, Kyrgyz geologists and paleontologists want to explore the most promising geological layers. If you need visa support, you can contact us. We want to establish a field base camp at the confluence of the Kara-Suu and Naryn rivers. For the base camp, we have all the necessary equipment. Every day our chef will prepare delicious local dishes. We rent a high-passable research car in the Kyzyl-Dzhar savannah.

Those wishing to take part in the expedition can write to the address: info@geoexplorersclub.com