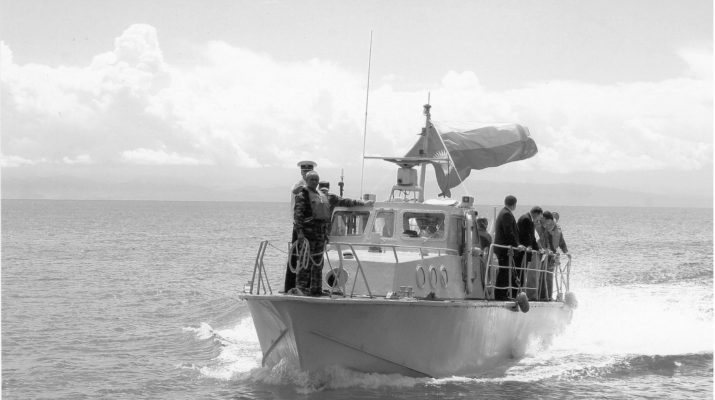 In the beginning, there was a map

Issyk-Kul was first mentioned by Chinese and Islamic map-makers at the beginning of the eighth century. However of particular interest is the Catalan-Majorcan atlas which was highly developed in the fourteenth century. Majorca island was an important trade center under the influence of Arab, Catalan, Italian and Jewish cultures. The maps made in Majorca were characterized by a high level of design and were considered “perfect mastery.” 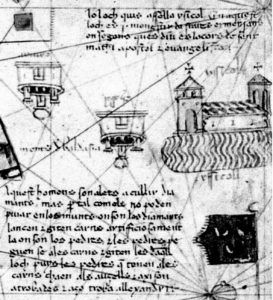 The atlas was made in 1375 by cartographer Cresques, the son of Abraham. On the fifth and sixth pages of the atlas we see the Asian continent and legends and notes on Central Asia, however they contained little important information. The interesting exception is Issyk-Kul Lake, which has an oblong shape on the map and extends from east to west, which corresponds to reality. Moreover, a building is depicted on the lake shore. The explanation reads: “This place is named Ysicol. A monastery of Armenian brothers is situated here, where, they say, lie the remains of Apostle and Evangelist Matthew.”

The next argument is another world map by Estenze from the city of Ferrara, made in 1450 in a circular shape. The map contains directions to the monastery but Issyk-Kul is not mentioned, nor any other lake or place. The map simply reads: “This monastery belongs to monks who preserve the remains of St. Matthew and who are Armenians.” Probably Esteze and Cresques referred to the same source.

The Russian traveler P.P. Semenov saw Cresques’ map in Venice in the early 1850s. He wrote that Issyk-Kul Lake was drawn on the map. On its north side was “a monastery of Nestorian Christians who fled from the countries of the Middle East to Asia and in the twelfth century founded their monastery on the shore of Issyk-Kul.” The traveler further speculated that the monks chose a site on the Kungey bay, protected from rough water and rich with fish. After visiting Issyk-Kul in 1856-57, Semenov wrote: “Kurmenty bay meets these conditions, but unfortunately I did not find on the shore nor in the drifts of the neighboring shore any objects supporting my supposition.” 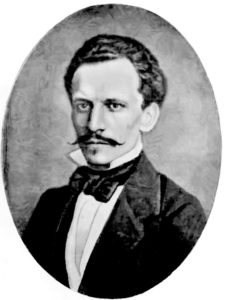 Half a century later, a Russian Orthodox monastery was built in this area. To the east of it, academician V.V. Bartold and the artist Dudin saw on the lakeshore “ruins of considerable fortification surrounded by a tetragonal bank…the area of fortification is covered by many small land elevations.”

Another half century later, the archaeologist A.N. Bernshtam conducted exploratory excavations at the site and concluded that there were settlements from two periods: the eighth to tenth centuries and tenth to twelfth centuries.

After another half century, nobody remembers the monastery. When discussing the monastery, the relics of St. Matthew, and the medieval settlement, we should bear in mind the historical, archaeological and theological interpretation. The objects are “readable” only by specialists and archaeologists. The objects will be introduced into scientific circles after excavations, restoration and conservation. Theologians may complete the overall picture.

The Metropolitan of Bishkek and Central Asia, Vladimir, published a book in 2002, “The Land of Descendants of Patriarch Turk,” in which he described the theological evidence for the existence of Christianity on the territory of modern Kyrgyzstan, including Issyk-Kul. 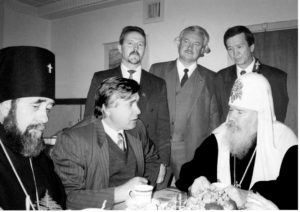 As Vladimir writes, “the imperishable body of holy Apostle and Evangelist Matthew found its rest on Kyrgyz land. As is known, he died a martyr’s death for Christ in Syria. Relics of the Apostle were brought here by Christians who fled in the second or third century from ancient Rome to a place famous for its tolerance. The sacred object was kept in a monastery on the shore of Issyk-Kul; the whole Christian world knew about its location…Later, the city where the ancient Armenian monastery was situated went under the water of the lake.”

Thanks to this information, we began reconnaissance work on the shore of Issyk-Kul and under the water, together with scuba divers of the Russian Underwater Confederation.

The new stage of archaeological investigation of the Kurmenty settlement began in 2005, when an exploratory team visited the site of the settlement and went underwater in Kurmenty bay. The local population considers this territory to be sacred. On Zayachiy peninsula (which was an island hundreds of years ago), there is an original cave complex of catacombs and monastic cells. The closeness of the subsoil structure to the remains of the medieval Christian monastery of the nineteenth century led to several possible explanations about its dating. According to elderly residents, the 30-meter long cave complex had two levels. The lower level, which was still accessible 40 years ago, was cut into about 30 monastic cells. Now the entrance is blocked. Restoration of the complex is needed for further investigation. A huge amount of medieval ceramics and dried bricks were found throughout the site, including the remains of large vessels (khoums) and thin-walled pottery. An unbroken jug covered inside with yellow glaze was found. 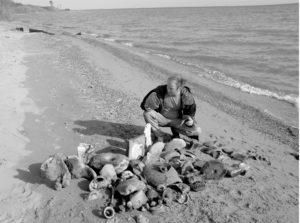 Aerial photography of the ancient Kurmenty settlement has shown that it had a square layout with a perimeter of more than one kilometer. The ancient settlement is protected on three sides with deep bulwarks formed by backwater and deep breaks enveloping the settlement from both sides. The south wall follows the relief of the land—built at a slant leading to a ravine. There is some raised land at the corner of the settlement and openings at the eastern and western sides of the wall. At the southern part of the settlement, there is a pit with a diameter of 2,5 meters and depth of 5-6 meters.

Near that area in 2003, a silver amulet decorated with a pattern of four crosses was found.

Archaeological artifacts collected by us and by those before us in this settlement and in the vicinity of Kurmenty include bronze crosses, a signet ring with ornamentation, and colorful beads.

To date, there have been more than two dozen archaeological findings of crucifix necklaces, mainly in the Chui Valley and near Issyk-Kul.

Many depictions of crosses were found on tomb memorials, kairaks, and ceramics, and interestingly they were in the form of petroglyphs. The number of such findings allows us to describe and classify them according to typology.

Let’s return to underwater artifacts. These include a large ceramic vessel fragment with an illustration of the Star of David found at the depth of five-six meters on the north side of the lake; an intact ceramic vessel with a hexahedral star etched on the side; tombstones with cross symbols, found on the south side of the lake. Fragments of heavily oxidized bronze mirrors, and inscriptions in bronze on Turkish belts (with “barakat” written in Arabic, meaning “God’s blessing”) were discovered. At a depth of seven meters, an intact bronze vessel was found. It is from the Karakhanid period (eleventh-twelfth centuries). 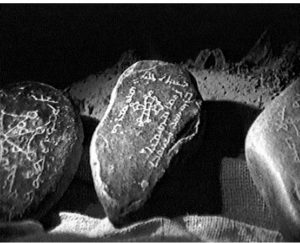 Search for the medieval monastery

All the collected and analyzed archaeological materials about Christianity allowed us to approach the issue of the Armenian monastery on Issyk-Kul Lake. It is well known that Armenian missionaries played a major role in spreading Christianity in the middle ages. They founded new Christian communities and religious buildings.

Written sources like the Catalan map of 1375 confirm that Armenian communities were living on the territory of present-day Kyrgyzstan. Armenian and Syrian writings on kairaks from Pishpek confirm the information from the Catalan map. The Armenian people were part of the Syrian Church. A valuable source testifying to the existence of Armenians is the inscription on a tombstone: a bilingual epitaph which dates to the year 1323. The epitaph was found in the Pishpek cemetery. It was dedicated to the Armenian Bishop John (Ovannesa) and is written in two languages, Armenian and Syrian. This provides a basis to believe that there was an Armenian colony in this area. We can see Armenian names in Syrian-Nestorian writings (such as Pogos).

Research, excavations, and the collection of archaeological artifacts, including with Christian symbols, and the record of local legends lead us to believe that the ancient settlements and catacombs on the peninsula are one single complex of the medieval monastery. Further study of the topography of the peninsula allowed us to speculate that the neighboring hill is architecturally identical to the catacomb hill. To confirm this hypothesis, there is a need for new, comprehensive archaeological research.

The attributes of the Christian culture found in Issyk-Kul are still being studied by researchers, mostly based on personal research experience and intuition. Any efforts to systematize and classify the archaeological artifacts and written sources with new historical and archaeological research are welcomed.

Only ongoing, continuous archaeological expeditions and fundamental historical research can solve the mysteries of the past and confirm the hypotheses of modern scientists. These hypotheses are based on reconnaissance work and periodic local research. 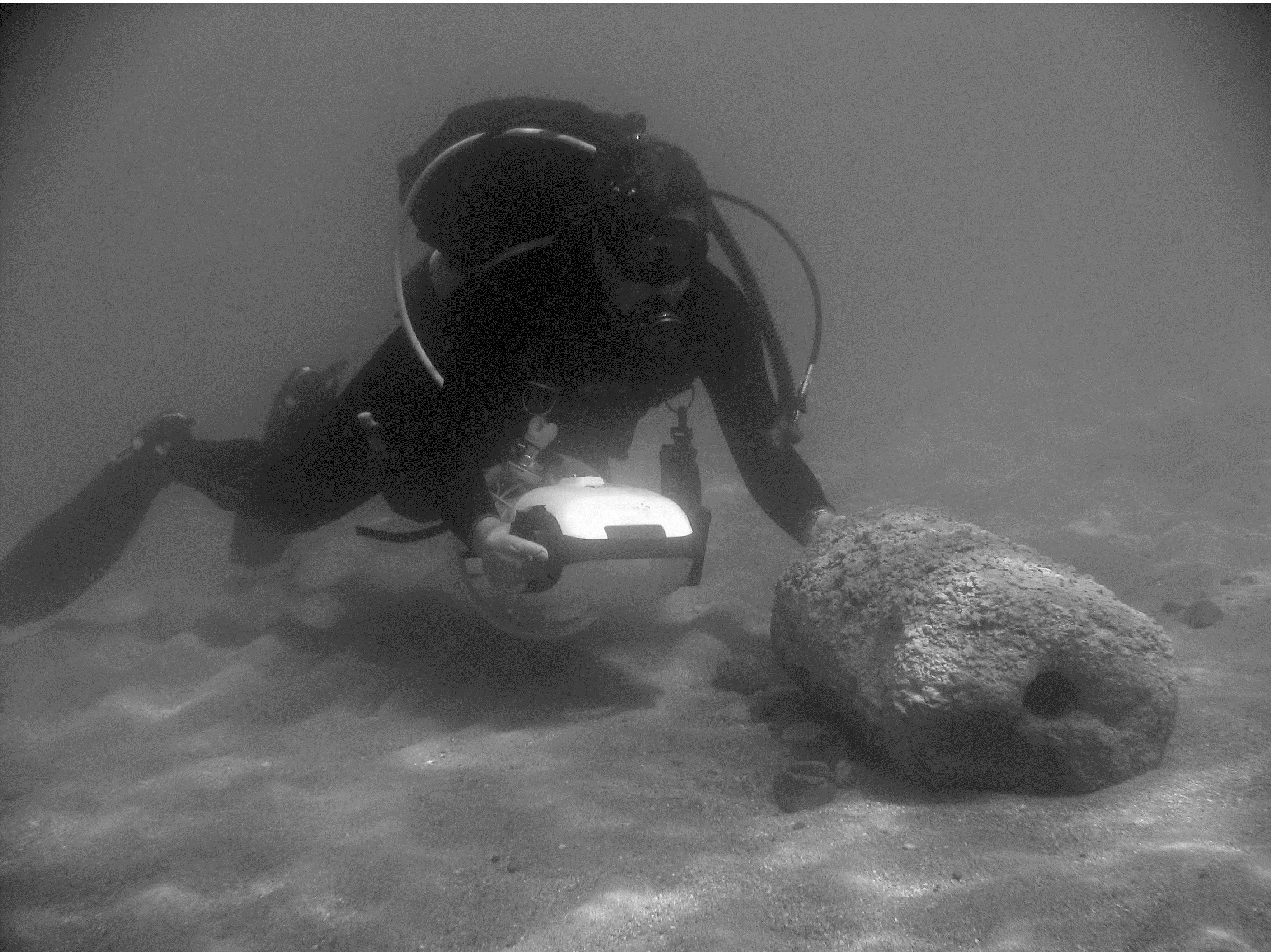