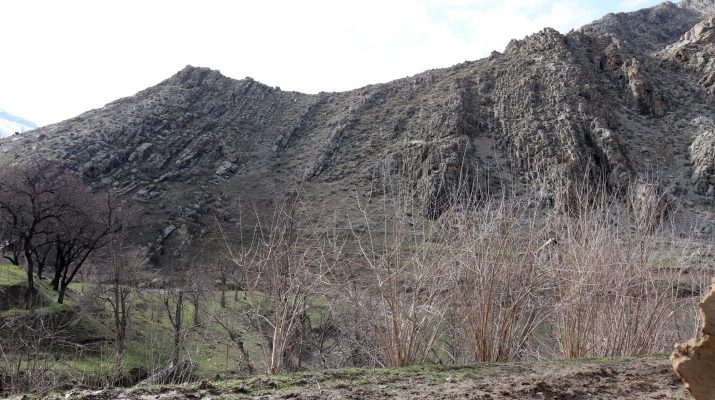 We invite researchers to take part in a paleontological and stratigraphic expedition to the South Tian-Shan in August 2022. The expedition is being conducted jointly with the Tian-Shan Geological Society.

The Tian-Shan has a long geological history, from the Proterozoic to modern Quaternary rocks.

Geopark Madygen is an excellent opportunity for international cooperation between specialists in stratigraphy, paleontology, and geology in general.

Upper Paleozoic deposits occupy a special place in the geological sections of the Southern Tian-Shan. According to geologists who have devoted themselves to the study of Central Asia, these sections can claim to be global reference stratotypes. At the same time, the border between the Bashkir and Moscow stratigraphic stages of the Carboniferous period in the southwestern Tian-Shan may become a place for a new “Golden spike”.

The main merit and research results belong to a group of scientists led by Dr. A. DZHENCHURAEVA from the National Academy of Sciences of Kyrgyzstan.

The main results of the conducted studies of foraminifera and stratigraphy of the Middle Carboniferous deposits of the high foothills of the Turkestan-Alai of the South Tian-Shan are as follows:

Currently, the International Working Group on the selection and substantiation of the GSSP of the lower boundary of the Moscow Stage of the International Stratigraphic Scale (ISS) is working to identify species-markers of this boundary in stratotype sections, as well as in areas where the deposits of the Bashkir and Moscow stages are fully represented.

In this regard, an analysis of the border Bashkir-Moscow foraminiferal assemblages in the Southern Tian-Shan was carried out. As a result of the analysis, it was found that the representatives of the evolutionary lines Tikhonovichiella tikhonovichi – Aljutovella aljutovica, Verella spicata – Eofusulina triangula, Depratina praeprisca – D. prisca are the most important for substantiating this boundary. This boundary is characterized by the simultaneous appearance in the upper zone of the Bashkirian stage of the species Verella spicata, Tikhonovichiella tikhonovichi, and Depratina praeprisca, and since the beginning of the Moscow Age, Eofusulina triangula, Aljutovella aljutovica, and Depratina prisca. This situation is recorded in all five sections studied. In some other regions of the world – Turkey, Spain, Donbass, the level of the boundary between the Bashkir and Moscow stages is similar to that in the Southern Tien Shan. There, this border is also drawn according to the joint appearance of the species Eofusulina triangula, Aljutovella aljutovica, Depratina prisca.

Considering that the stratotype of the Bashkirian stage is located in the Urals, and the Moscow stratum – in the Moscow region and there are no verellas or eofusulin there, apparently, this evolutionary line cannot have a correlation potential comparable to the species Aljutovella aljutovica and Depratina prisca. So, one of these two species Aljutovella aljutovica or Depratina prisca can be used as a marker of the lower boundary of the Moscow Stage. For the Tien Shan, along with marker species, representatives of the evolutionary line Verella spicata – Eofusulina triangula will undoubtedly play a large correlation role.

As a result of studying the Bashkir-Moscow deposits in Turkestan-Alai (South Tian-Shan), it was found that:

The last biostratigraphic scheme for the Carboniferous of Kyrgyzstan was drawn up in 1990 during the implementation of the project “Compilation of regional stratigraphic schemes of the Precambrian and Paleozoic of Kyrgyzstan. The biostratigraphic scheme was drawn up according to the definitions of fossil fossils of orthostratigraphic groups – foraminifera, conodonts and brachiopods. These fossil remains were found, identified and described from the reference sections “Gaz”, “Akhuntau”, “Kshemysh”, “Khojatush”, “Garaty” located in the Alay and Turkestan ridges of the South Tian-Shan. Based on the study of foraminifera and conodonts in these sections, a scheme of subdivision of the Lower – Middle Carboniferous was developed. The Upper Carboniferous was studied using foraminifers from the reference sections of the Karachatyr Ridge of the Southern Tian-Shan.

However, further work on the study of the Carboniferous of the Middle Tian-Shan (reference sections “Akbeit”, “Kojagul”, “Ichke”) made it possible to obtain new materials that made adjustments to the existing biostratigraphic scheme.

In the northeastern part of the Northern Tian-Shan, reference carbonate sections (Boordu, Tekes, Tyup) were also studied, which made it possible to supplement the characteristics of the Middle Carboniferous of the biostratigraphic scheme.

In addition, the study of the tier boundaries in the Carboniferous of the world, which began in recent years, with the aim of staking them out with “golden nails”, made it possible to attract this huge material for solving this issue.

All this led to our research on the paleontological substantiation of the biostratigraphic scheme of the Carboniferous of Kyrgyzstan.

Thus, we argue that the reference stratigraphic boundary between the Bashkir and Moscow stages and the point of the global stratotype of the boundary is located in the southern Tian-Shan of Kyrgyzstan.

Research and obtaining materials about the geological heritage to justify the nomination dossier for the inclusion of the geological section “Gas” in the List of International Importance.

Confirm the belonging of geological sections to the international stratigraphic standard-standard for the lower boundary of the Moscow Stage of the Upper Devonian or a Global Boundary Stratotype Section and Points (GSSPs).

The results of other studies will be very useful and necessary for the creation of a geological museum on the territory of the future Geopark.

We want to receive materials for joint publications in world scientific journals.

We will welcome all interested paleontologists, biologists, geologists and others.

We will be glad to Welcome scientific centers, associations, researchers who are ready to participate in scientific research on the expedition.

The expenses for participation in the field expedition will be used for renting transport, purchasing food, paying for the cook and technical staff in the field camp, consumables for the expedition, for accommodation in hotels, guest houses and the field camp.

GeoExplorersClub will provide participants with the necessary field equipment and create comfortable conditions for field work.

– We will provide visa support,

– We will obtain official permits for legal research, sampling and minerals,

– We will provide the necessary logistics, meeting at the airport, etc.

We will create a good and friendly environment for collaborative research.

Those wishing to take part in the expedition can inform by email: info@geoexplorersclub.com

Welcome to the southwestern Tian-Shan!