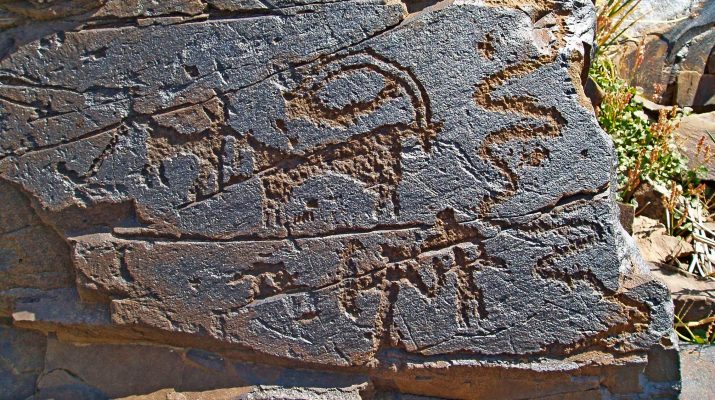 Tian-Shan (Kyrgyzstan) has amazing places where you can see huge galleries of ancient rock paintings. These drawings were left a very long time ago and until now scientists cannot solve many mysteries of the history of the origin of these rock paintings.

Another rock gallery is located on the northern shore of Issyk-Kul Lake and is called Ornok. There are also several hundred thousand rock paintings here.

Who, when and how, left these drawings, is to be found out during our expedition in July 2021. In addition to these grandiose objects, we propose to travel to the south of the country, to the Fergana Valley, where we can see rock paintings of a sedentary culture.

The expedition should result in a photo album, as well as an atlas and a guide to rock paintings. Saimaluu-Tash and Ornok, as well as other rock galleries should become world monuments of culture and history, should become objects of ecological and educational tourism.

The origin of many rock paintings in the Chil-Ustun cave and other caves in the Fergana Valley remain a mystery to scientists. Currently, studies of these figures are not being carried out.

Therefore, we invite you to take part in an archaeological expedition on the rock paintings of the Tian-Shan. We will visit to Issyk-Kul lake, Saimaluu-Tash plateau, Osh city outskirts, Chatkal mountain range and Talas valley. We will see various historical monuments and archaeological sites. The result of the joint expedition should be a photo album about rock paintings, as well as a guide to the history and archeology of Kyrgyzstan in rock paintings.

About rock paintings of Saimaluu-Tash

The ancient drawings, carved in stone, represent a grandiose monument of natural and cultural heritage, keeping a unique collection of ancient rock paintings of world value. In Saimaluu-Tash, more than 9500 stones have been identified with images left by people from the third to the beginning of the second millennium BC – the Neolithic and Bronze Age.

Saimaluu-Tash is famous for the fact that it was constantly used as a sacred place among the population of the Tian-Shan and Fergana, from the third millennium BC to the Middle Ages and even up to the present time.Thus, this monument is an archive of knowledge about everyday life, mentality, history and culture of the ancient tribes of hunters, herders and the first farmers in Central Asia, about the development of their spiritual culture. This description of Saimaluu-Tash is presented on the UNESCO website, which indicates a very high natural value of this site.

A rocky plateau with numerous petroglyphs is located on the eastern slope of the Fergana ridge, at an altitude of about 3100 m. The place is difficult to access. The most convenient way to Saimaluu-Tash begins south of the Kazarman village along the eastern slopes of the Fergana ridge. The best time to visit the ancient art museum is August. The rest of the time, the mountain peaks are covered with snow, which melts only for one summer month. Due to the fact that one can get into the tract only one month a year, this arouses even greater curiosity among tourists.

Saimaluu-Tash in translation from Kyrgyz means “patterned stone”. The rock paintings were discovered in 1902 by the military topographer N.G. Khludov. For many years, no significant expeditions for further exploration of Saimaluu-Tash were made until 1991. Saimaluu-Tash is included in the Tentative List of World Heritage Sites and is under the protection of UNESCO.

Why did ancient artists use this hard-to-reach place for their works? From the point of view of geologists, the main factor for ancient artists in choosing a location for their works was the hardness of the rock, which ancient artists could easily identify by its appearance and physical properties. These rocks turned out to be secondary products of basalts – igneous rock that poured out and solidified on the surface of the Earth. These properties of rocks prompted the ancient artists about which stones are best used in order to immortalize their drawings.

The drawings are engraved on the smooth surfaces of the basalt boulders. Most likely, the drawings were created using bronze and iron tools.

According to historians, it was the high-mountain plateau above the Fergana Valley that was the place of worship of the ancient peoples of Fergana. Some petroglyphs of Saimaluu-Tash date back to later images, dating back to the 8th century, or even later. What did the ancient inhabitants try to express in their drawings and why exactly here on a high plateau? In the Bronze Age, it was customary for the local settlers to carve on stones, and in the Middle Ages, the place became sacred and was used for religious rites. On the stones you can see images of ibex, horses and wolves, as well as hunting scenes in which hunters chase deer with arrows and spears. In addition, there are drawings depicting the cultivation of the earth, the moon, the sun, dancing demons.

The petroglyphs of Saimaluu-Tash have not yet been fully studied due to the fact that the valley is located in a remote area, and access there is only open in the summer months when there is no snow.

In other, most remote places of Kyrgyzstan, tourists also find rock paintings and inscriptions.

We want to explore cave paintings and create a travel guide with vibrant photographs. We invite everyone to take part in this expedition to the Tian Shan.