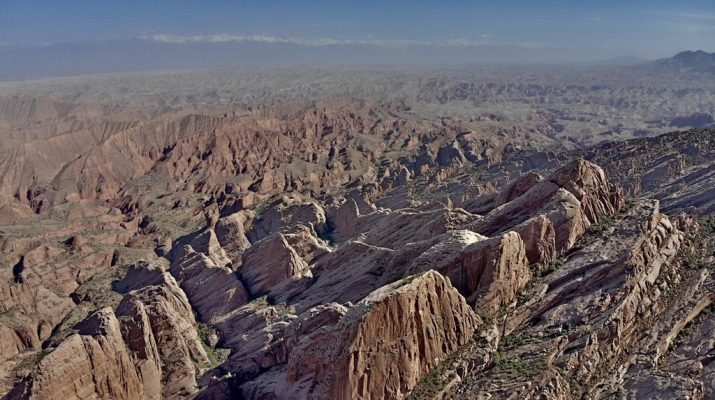 Dates can be changed for individual groups.

An unforgettable geological journey across Uzbekistan.

In the north, Uzbekistan borders with Kazakhstan, in the south with Turkmenistan and Afghanistan, in the east with Kyrgyzstan and Tajikistan.

The natural landscapes of Uzbekistan are strongly distinguished by the contrasts between deserts and high snow-capped mountain ranges. The nature of Uzbekistan is fantastically and aesthetically beautiful. A traveler, in a relatively short time, can visit both deserts, where you can see the remains of dinosaurs, and deep mountain canyons with expressive geological forms.

The geological heritage of Uzbekistan is a variety of landscapes, individual outstanding landforms and even a geological reserve.

In this program, we will make a geological journey across Uzbekistan. The program is designed for 21 days. 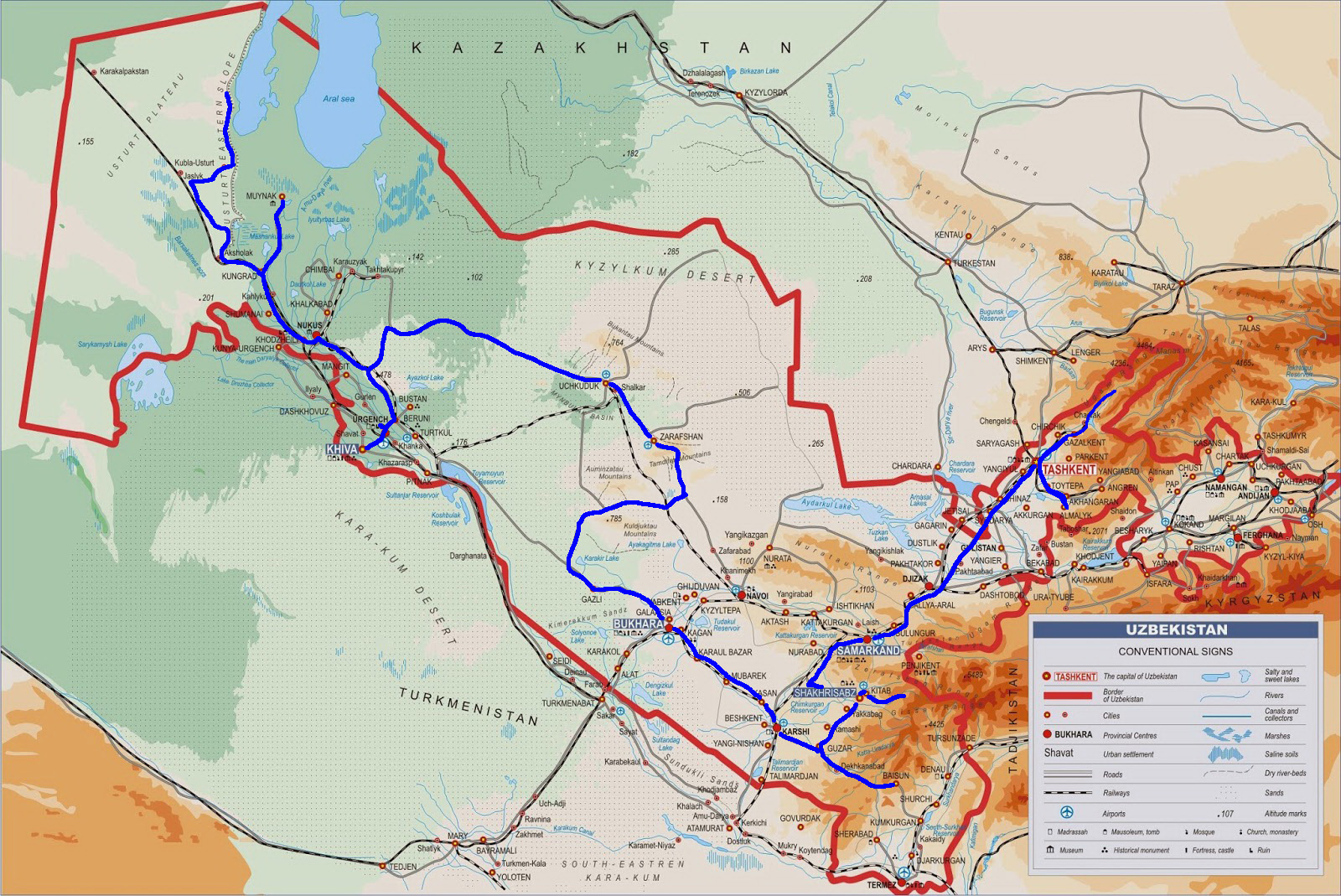 Briefing in the morning, meeting with an expert guide. After lunch, sightseeing tour of Tashkent city.
In the evening, transfer Tashkent-Charvak reservoir. (100 km, 2 hours), hotel accommodation on the bank of the reservoir – Avenue Park 3 *.

Ugam-Chatkal National Park belongs to the North-Western Tian Shan – a transboundary natural monument under the protection of UNESCO. Excursions to local attractions. Geological sections. Chirchik reservoir. On the way, an excursion to the Chatkalo-Kuramin geological sections: geodynamic structures, biostratigraphic geological layers. In the middle course of the Pskem River, geotourists will get acquainted with the processes that form the geomorphological appearance of the territory. Return to Tashkent. Overnight at the hotel.

In pre-revolutionary times, on the site of modern Almalyk, there were 2 small villages – Almalyk and Karamazar. Today Almalyk is an industrial city, in the vicinity of which there are deposits of non-ferrous metals – copper and lead
Excursions to the plant, the quarry and the field. Moving to the Angren coal mine, inspection of the quarry and the Akhangaran reservoir. Excursion to the Yangiabad city – the first uranium in the USSR was mined here. The mines are currently mothballed. The total length of the uranium mines in Yangiabad and Krasnogorsk exceeds the length of the Moscow metro. Return to Tashkent (130 km, 2 hours). Overnight at the hotel.

On the way, we will pass the Tamerlane Gate – the narrowest part of the Sanzar river gorge – a passage in the mountains separating the Malguzar and Nuratau ranges (western part of the Pamir-Alai. The width of the gorge, with steep rocky walls, is 120-130 m. In some places the gorge narrows to 35-40 m. Highways and a railway from Tashkent to Samarkand pass along the gorge. On one of the rocks, there are inscriptions in Persian. One of these inscriptions was made by order of Ulugbek, the astronomer and ruler of Samarkand, the grandson of Tamerlane. Inspection of the canyon. Visiting Malguzar geological sections. Malguzar – the mountain range is the northwestern spur of the Turkestan ridge. It presents paleontological and stratigraphic outcrops, geodynamic structures and outstanding relief.

In Muzbulak, an excursion to the national house, where carpets are made according to the old technology: everything from local materials – obtaining yarn from sheepskin, dyes. Excursions to the Suffa plateau, 2400 m: numerous rock forms named “Kyrk-Kyz”, “Radiotelescope”, “Chor-Tanga canyon”.
Overnight at Zaamin National Park. Hotel 3 *.

Excursion to the Nuratau ridge: Ortacheku cliffs – the holy spring of Khozhda-Bogbon-ota (vokluz) – Bogambir geopark – Koitash tungsten deposit and Koytash rock forms in the form of a rock garden. Here we will visit the places where paleontological artifacts were found. We will see geological structures and amazing landforms. As well as geodynamic geological structures. In the evening transfer to Samarkand. Overnight at the hotel.

The road lies through the Zeravshan mountain range, the Takhta-Karacha pass, 1675m – the highest point of our route on this day. On the way, there are stops to inspect geomorphological monuments and paleontological sections. Excursion to the Kitaba Geological Museum. Next, an excursion to the Kitab International Latitude Station (KMShT) – a subdivision of the Mirzo Ulugbek Astronomical Institute. The station is located 500 km south of Tashkent. It is one of five latitude stations located at a latitude of 39 degrees north latitude, which track changes in the position of the Earth’s pole. Arrival to Shakhrisabz. Evening excursion to ancient Shakhrisabz: Ruins of Ak Saray palace (1380-1404), Doruttilavat ensemble (XIV-XV centuries), Dorusiadat ensemble (XIV century), Amir Temur monument, Kok Gumbaz mosque (1435) Jami mosque ( 1915), Jahangir Mausoleum (XIV century). Overnight at the hotel.

Transfer from Shakhrisabz to the Kitab geological reserve (geopark), 50 km, 1.5 h. Excursion to the famous geological section Zinzilban, which is recognized as the keeper of the international stratigraphic standard – the standard of the lower boundary of the Emsky stage of the Lower Devonian or a point of the global stratotype of the stratigraphic boundary (elected by the International Subcommission on Devonian stratigraphy in 1989 and ratified in 1996 by the International Union of Geological Sciences). Today the area of ​​the reserve is 3938 hectares. There are also paleontological and biological museums.

Based on the results of the study of scientific data presented by international studies, the Kitab State Geological Reserve is the only complete Reference in the world – the standard of the Ems base, which means that the place is one of the first land areas that emerged from the World Ocean. The emergence of land from the water, scientifically confirmed by the International community of scientists. This is one of the few geological monuments of the appearance of land from the world’s oceans many millions of years ago. It is called the exit of Life from the World Ocean onto land. Return to Shakhrisabz. Overnight at the hotel.

On the way, you will visit historical and architectural sights. In the gorges of the Gissar ridge, we will make excursions to paleontological and biostratigraphic sections. We will also see beautiful structural geological forms and varied landscapes. Southwestern Gissar is an area with undisturbed primary geological strata, which is a rare occurrence in young and growing folded (mountain) areas. On the way, excursion to Derbent canyon and Teshiktash cave. Overnight at Boysun’s guest house.

The further route lies through the Karshi steppe to the ancient Bukhara city . On the way, you will see semi-desert landscapes in places resembling savannah. Stops at geological objects. Accommodation in a hotel in the Bukhara city.

The path lies through the Kyzyl Kum desert. Along the way, stops and photographs of landscapes. Stop in the Zarafshan city. The city is located in the Kyzylkum desert, next to the large gold and uranium deposit “Muruntau”. The city was built in the Uzbek SSR in the late 1960s to serve gold mining enterprises, which at the Muruntau deposit accounted for approximately 30% of the total gold production in the USSR.

In 1958, a geological exploration party from Samarkand began to explore the region (Bukantau, Tamdytau and Muruntau mountains). After the finds of gold and uranium deposits in this region, an order was given to develop the region in the Kyzylkum desert. From that moment, the history of the city began, the official date of its foundation is 1965. A hydrometallurgical plant was built. A unique gold deposit was being developed. Workers were recruited from all over the Soviet Union, and only a few left. The enthusiasm for creation in extreme conditions prevailed over human affections, climate, nature and living conditions. Further journey to the city of Uchkuduk. Overnight at the Uchkuduk hotel.

The city is located in the central part of the Kyzyl Kum desert. A mining and metallurgical plant has been operating in the city since 1958. Most of the residents are workers of this plant.

Since 1995, a gold-extracting complex has been operating in Uchkuduk, which produces about 20 tons of gold per year. The history of the appearance of Uchkuduk is associated with the discovery in the 1950s of a uranium deposit in this area, which the USSR badly needed. Above the field, the instruments recorded a powerful burst of radiation, which was reported to Moscow. A geological exploration expedition was urgently organized for a more detailed assessment of the field. At the end of the 1960s, due to the rapid growth in the volume of uranium ore mining, both by open-pit and underground methods (and later by the method of in-situ leaching), the settlement began to develop actively. Until 1979, it had the status of a closed secret strategic facility. Overnight at the Uchkuduk hotel.

Early start. Long drive in the desert + excursion to Jurakuduk.
The path lies through the Kyzyl Kum desert to the oases of Khorezm. On the way – excursion to Jarakuduk. This is an area with a diverse complex of fauna and flora remains of the Late Cretaceous time (95 million years – 65 million years). Here were found the remains of land, flying, water dinosaurs. And also here were found traces of ancient life, the remains of insects, the remains of plants. More than 240 taxa of Late Cretaceous organisms have been found here, which has no analogues in the world. This paleontological object is world famous among paleontologists. On the way, the Amu Darya river. Accommodation at a hotel in the Khiva city.

Drive to the Ustyurt plateau. Ustyurt is a desert and plateau of the same name in the west of Central Asia, located between Mangyshlak and the Kara-Bogaz-Gol Bay in the west, the Aral Sea and the Amu Darya delta in the east. The area is about 200 thousand km². The main landscape is a clayey saline desert, the southeastern part of the plateau is a clayey-gravelly desert. The Karabaul Upland is located in the center of the plateau.

Not everyone knows that the chinks of the Ustyurt plateau represent a continuation of the border between Europe and Asia. In Kazakhstan, the Ural Mountains are gradually disappearing, that is, the main landmark when drawing the border disappears. The Ural and Emba rivers do not share anything, since the terrain they cross is identical.
Therefore, the southern part of the border runs from the Ural Mountains to their continuation on the territory of Kazakhstan to the Mugodzhary mountains (Aktobe region), then along the edge of the Caspian lowland, where the East European Plain ends. The Caspian lowland was formed millions of years ago, when the Caspian Sea washed the western ledges of the Ustyurt plateau. Therefore, most likely, the edge of this geological formation should be considered the border between Europe and Asia.
We will take an excursion to the dried Aral Sea. Overnight at the yurt camp.

Excursion to geological sections in the “Aral” geopark located on the western coast of the sea. Panoramas from the edge of the Ustyurt plateau to the remains of the Aral Sea. An extraordinary object is the eastern cliff of Ustyurt on the western shore of the Aral Sea. Destruction processes occur here, due to both the geological structure of the plateau itself and hydrogeological, gravitational and other processes. Overnight camping by the sea.

We return to the Nukus city. Overnight at the hotel.

Photos of landscapes of Uzbekistan